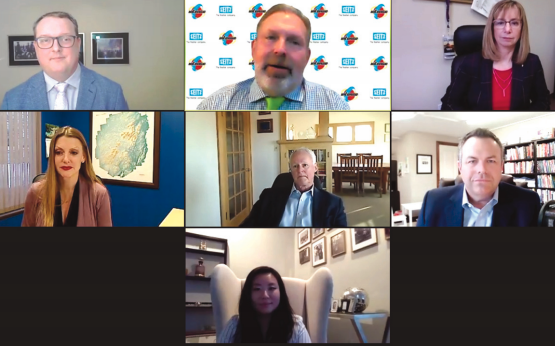 For almost half a year now, America’s Best Cleaners has hosted five monthly online installments of its Leadership Forum featuring a multitude of industry leaders discussing their trials and tribulations of the past year, as well as strategies for planning for the murky future.

Those who attended the fifth Leadership Forum in mid-January listened to five more industry innovators, including: Dave Coyle, owner of In the Bag Cleaners and Maverick Drycleaners; Kermit Engh, owner of Fashion Cleaners and managing director of Methods for Management; Dianne Lee, CEO of JSK Hospitality Group; Leslie Schaeffer, CEO of TCATA and managing director for National Clothesline; and Kurt Wickiser, executive vice president of Seitz.

Wickiser noted it’s a slightly different style working with a family-owned German company, though “they are excellent to work with and are definitely not micromanagers.”

At a company with its product manufactured overseas, Wickiser is no stranger to trying to make early plans.

“We’re always forecasting three months, four months, five months down the road to make sure that we always have inventory,” he said.

Complicating matters, Covid kept over a dozen field representatives from making in-person visits for several months. Despite that, Seitz still felt it was a good time to be aggressive.

“We’ve actually added a couple of employees in the last six months — one of them being a business development manager for us — Frank Briercheck. He’s out aggressively pushing for new business, new markets,” Wickiser added.

“I do think that the people who have the most growth during times of crisis are those who are able to create some level of certainty when others are uncertain,” he added. “You know, the uncertain person almost ends up being like a turtle that crawls back into its shell. The certain person stands up and says, ‘What other problems can I solve?’”

Coyle has aggressively inflated his marketing budget from 4 to 6%, and is now targeting his top 20% of customers, as well as his competitors’ top 20%. “

We’re also pursuing a lot of affiliate opportunities,” he added. “With us having so many data points, we have the ability to do some very unique things to leverage that.”

Dianne Lee of JSK Companies, which includes The Press Drycleaning & Laundry, also pursued sales heavily, while keeping one eye open for new hires. “Our motto has always been sales must never die and hiring must never die,” she said. “So, even if hours are short, we’re always looking for parttime employees that we can try out.”

As a rule with her employees, Lee believe in open book honesty, even when the book seems to read like a horror story.

“We don’t try to sugarcoat anything,” she emphasized. “We tell them these are the hours you probably are going to be getting. These are the opportunities you have.”

Like Lee, Kermit Engh is an advocate of open book management. “Sharing financials with employees is not something most people want to be doing,” he said. “We keep people informed about what’s happening with the business and what’s happening around us so there are no surprises. I think it’s incredibly unfair if your employees don’t know what’s going on, and all of a sudden, one day things are not the way they used to be.”

Engh noted that Fashion Cleaners has seen a lot of growth in its bridal services during the last four months, and, of course, its routes have flourished.

“We’re restructuring our company. We’re going to be closing a store here soon. We just don’t need the brick and mortar,” he added. “We’re focussed on converting those folks to routes and we’ve been incredibly successful in doing so.”

Schaeffer, the final member of the panel, faced slightly different challenges as the CEO of TCATA and with her family’s publishing company that produces National Clothesline.

“We were trying to shift gears and pivot a little, too, because we lost a whole year of trade shows. That was devastating, not only for the associations, but the manufacturers and suppliers, and… the networking,” she noted. “So, we put together, with the help of Peter Blake, a Fall Fest EXPO and it was educational, and it was five afternoons. It exceeded our expectations. We are planning to do another, shorter event in the Spring followed by a larger event again in the Fall.”

Overall, all of the participants were excited for the future after many months of challenges. Lee plans to use the experience to propel her business forward.

“There are days where I am defeated, exhausted,” she admitted. “But, I think just being resilient, being malleable, will get us through everything.”

This article was originally written by a writer at nationalclothesline.com.