Affiliates Give Thumbs Up on Fall Meeting 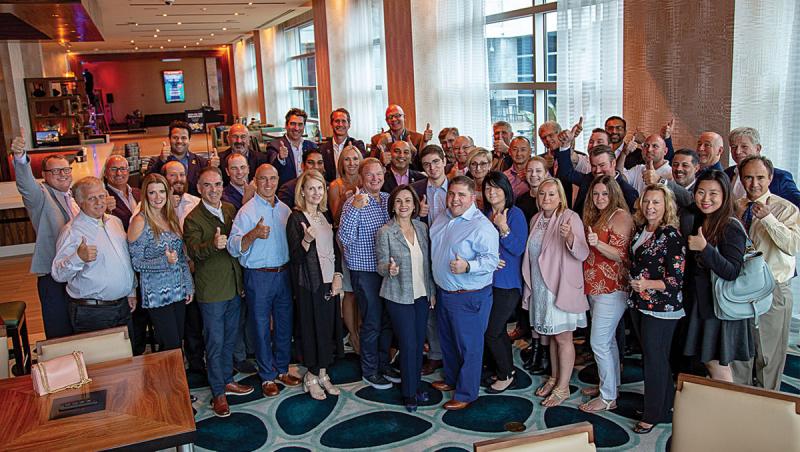 Affiliates Give Thumbs Up on Fall Meeting

DELMAR, N.Y. — America’s Best Cleaners (ABC), which describes itself as a, “certification agency and an industry leading team of consultants,” held its annual Fall Affiliate Meeting last September at The Landing at Rivers Casino hotel in Schenectady, N.Y.

The meeting was hosted by Best Cleaners New York, and the theme was all about labor.

Affiliate Laurie Corona of Greene’s Cleaners described the meeting: “The focus on labor was key because it covered an area that we are all struggling with in the current economic climate.”

“Affiliates were greeted with a trip to The Van Dyck for a beer tasting with three local brewers, Mad Jacks Brewing Company, Wolf Hollow Brewery, and Great Flats Brewery. It was a great way to kick off the events of the next several days,” ABC says.

“Day two started bright and early with a trolley trip to the headquarters and plant of fall affiliate meeting host Best Cleaners. Affiliates were given free reign for a complete inspection within the Best Cleaners main production plant and retail store,” the consulting group notes. “Then it was back to the hotel for a detailed debrief, and development of a comprehensive improvement plan,” it further relates.

ABC points out that, “With the tone of the event being, ‘Quality is the first priority,’ Liz Davies, ABC technical trainer, talked to affiliates on the importance of quality with her presentation Benchmarking Production and Quality.”

The afternoon featured presentations by industry vendors on how to improve quality and productivity representing efficiencies from ticket to bagging, ABC notes.

“Thanks to Paulo Rocha of Miele, Richard Fitzpatrick of Kreussler Inc., Bill Odorizzi and Wesley Nelson of Sankosha, and Nathaniel Dubaski of Metalprogetti for their mind-expanding thoughts and ideas,” the group relates.

Other presenters, ABC notes, included: Tran Brown of SPOT Business Systems on Client to Technician Communication to Quality Control and PPOH; and Dave Troemel of marketing firm BeCreative360 talking on the power of customer reviews.

Affiliate Laurie Corona summed up the event: “I came away from the meeting with some insights on how businesses in other industries handle labor struggles,” she relates.

This article was originally written by Tim Burke at americandrycleaner.com.