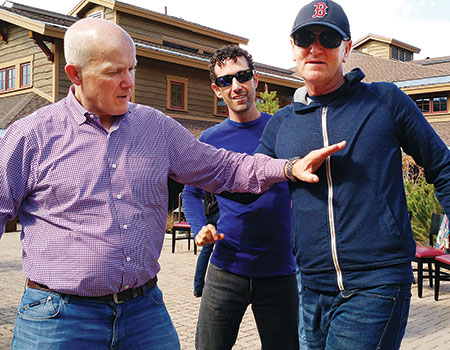 The Oct. 3-5 event hosted by Henries Cleaners of Salt Lake City included an outdoor workshop that blended the principles of martial arts and business management; presentations on business succession and wealth management; and an exchange of ideas for best business practices.

The semiannual meeting of ABC Affiliates took place at the Lodges at Deer Valley and followed immediately the SPOT Users’ Conference staged at the same location.

Josef Shapiro, ABC’s business coaching consultant, led the outdoor workshop. Shapiro, a principal at Refound, and an eMyth Business Coach, is a former competitive martial artist. He introduced attendees to the principals of Aikido, often translated as “the way of harmonious energy,” and a philosophy that easily translates to business management.

Day two opened with an interactive discussion of daily business situations in which the techniques and philosophies learned with Shapiro could be implemented and practiced in the workplace. The group then heard from Jeffry Getty and Lisa Clifford, both senior vice presidents at Key Private Bank, who presented vital information on succession plans, wealth management, and tax preparedness. The meeting wrapped with the sharing of best business practices and ideas amongst the attendees.

“Big picture, sharing the best practices and benchmarking with other business owners is really valuable,” says Kendall. “But, specifically, I’ve been trying to cut through some decisions about the best solvent, the best assembly system, and the best delivery protocol. Being here and talking with the other Affiliates has helped clarify my thinking, and I’m ready to go back and implement some new systems.”

Alex Shvartshteyn of London Cleaners, Cleveland, Ohio, agrees. “The best value I’ve gotten out of my 11 years as an Affiliate is my relationship with other members,” he says. “If I need help or input, I can just call or e-mail one of the other Affiliates. I don’t feel like I have to travel the road on my own.”

The fact that ABC Affiliates are, by design, in non-competitive markets takes any hesitation out of reaching out for advice or information, says Shvartshteyn.

ABC’s stringent list of standards, which include regular and strenuous onsite inspections and testing, as well as surveys of retailers and clients and secret shopping reports, has resulted in an elite network of affiliates across three countries, the organization says.

Colin Robinson, plant manager at ABC’s Calgary, Alberta, Affiliate Tower Cleaners, refers to a statement made by Shapiro during the Aikido workshop: “You aren’t born a leader, you’re made one.”

“It’s great to be with leaders and business owners with experience at these meetings,” he says. “I’ve really found some role models here.”