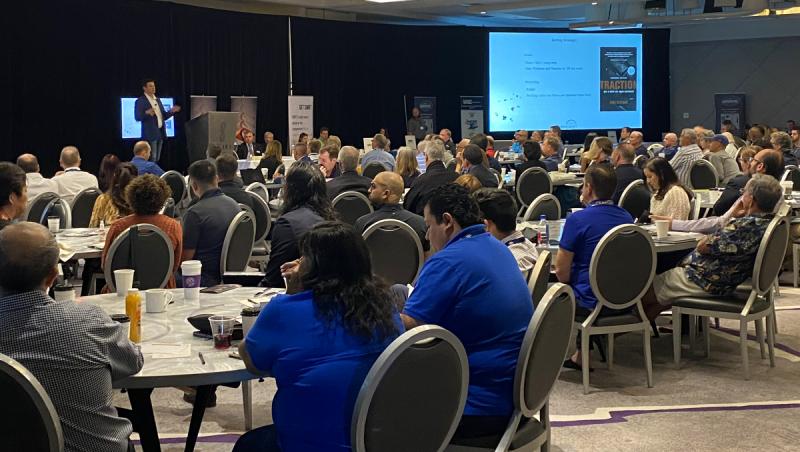 LAS VEGAS — Online meetings and Zoom conferences were a lifeline, but they are no substitute for face-to-face gatherings.

This was the often-expressed sentiment on the floor of Fabricare 2021, an educational conference that took place in Las Vegas on Oct. 2 and 3. The event, attended by approximately 200 drycleaning professionals, was the first opportunity most have had to interact with their peers in person since the pandemic lockdowns of 2020.

During the event, presenters from around the industry spoke on topics including best practices in running successful cleaning companies, hiring and retaining employees in today’s tight labor market, keeping the entrepreneurial spirit alive and what the future will bring to the dry cleaning industry.

In addition, more than 30 exhibitors had tables set up to present their goods and services, answer any questions the attendees might have and meet people in person for the first time in months.

“We are very proud and happy to see this kind of turnout,” says Sassan Rahimzadeh, president of the California Cleaners Association (CCA), which organized the event. Rahimzadeh is also president of ARYA Cleaners of Chula Vista, California. “It has been a culmination of a lot of people’s hard work over a long period of time.”

Rahimzadeh pointed out that putting together one of the first in-person industry gatherings in the aftermath of the lockdowns was no easy task.

“There was no pre-existing roadmap for an event like this anywhere in the industry — not at this scale,” he says, “so, we had to create it. We started planning this in late 2020, which was in the thick of COVID, so it became a moving target for us. We had to shift and modify the program over the last nine months to get it to where it is today. We’re glad to see it be a success.”

While the event was well attended, it was designed as a smaller-scale educational conference rather than a full-sized trade show — something Rahimzadeh and the CCA hoped the exhibitors would attend and support.

“Initially, when we looked at the capacity of the room, we knew we were only going to have a couple of hundred people in here — we wondered how the vendors would feel about that, rather than having 800 or 1,200 people,” he says. “How are they going to feel about the feedback that they would get?”

Rahimzadeh and the CCA have been happy with the results. “From every single one of the vendors that I’ve spoken to so far, they’re all extremely pleased,” he says, “and they’re all very happy with the turnout as is because we have gotten the best of the best to be able to attend the seminar.”

“Overall, it felt like a shot in the arm for the garment care industry,” says Aaron Newport, marketing manager of GreenEarth Cleaning, one of the exhibitors at the conference. “I was inspired by so many of the presentations and encouraged for the future by the positivity in the conversations we’ve had at our table and at the affiliate reception. And personally, it just felt good to have face-to-face conversations, shake hands, and even hug it out with some amazing humans I haven’t seen in person for far too long.”

“I left Vegas with a reinforced sense of resiliency in our industry,” Newport says. “The presenters and attendees alike seemed to carry overwhelming positive energy — it was infectious. Each presenter brought innovative ideas and inspirational stories, and our team has enjoyed discussing how we can apply those to our business.”

Many of the speakers have made webinar presentations sponsored by various groups within the industry over the past 18 months — and Rahimzadeh welcomed the wealth of experience the professionals brought to the event. He did, however, make a request of them.

“We wanted to make sure that everybody got fresh content,” he says. “We asked all of our speakers to come with brand-new material that they had never presented.”

This request — which the presenters agreed to — was made to close the book on the pandemic era and turn to a fresh page for the industry, Rahimzadeh says.

“We’ve all been watching the Zooms, and we’ve been oversaturated with the information that’s been coming at all of us over the last year and a half,” he says. “We felt that this is an opportunity to reset that mark and start with new material. The market is shifting, the business is changing and things are evolving.”

The View from the Floor

Sherrie and Garney Hill operate Martinizing Dry Cleaning in Wichita, Kansas. The Hills began in the industry in 2018, and in March 2020 — just before the pandemic lockdowns began — they purchased four additional stores and bought into the Martinizing franchise.

In an industry where multi-generational ownership is not uncommon, the Hills were happy to meet people with that kind of perspective.

“This has definitely been worth the time,” Sherrie Hill says. “We’ve gotten nuggets of information, and we’ve done some great networking and met some great people. We’ve also got to meet some people from our headquarters, which is a really good thing for us.”

The Hills valued both the interactions and educational aspects offered at Fabricare 2021. “As new owners, we know we need to grow,” she says. “We’re always looking to expand and learn as much as we can about the industry. This conference has been a great experience.”

One of the presentation slots was a Leadership Forum, conducted by America’s Best Cleaners (ABC) Executive Director Christopher White.

ABC conducted a monthly online version of the Forum, via Zoom, for six months in late 2020 and early 2021. This was the first time the format — where White discusses management and business issues with a group of industry leadership — was performed live, and White was pleased with the results.

“It was awesome,” he says. “Doing this live, in front of an audience, I thought things were a lot more fluid, and the tone and dynamic of the body language allowed us to express ourselves better. It was also great that we could get feedback from the audience to let us know that we were on the right path.”

White believes that the live format was easier on the panelists than conducing the Forum via Zoom. “They could see the audience, and didn’t feel like they were speaking into dead air,” he says. “I think everyone started to feed off the feeling of being in front of an audience.”

White said that simply being in the same room with people from the industry was a tremendous boost — not only for the opportunity to conduct a Forum, but on a more fundamental level.

“This is a human contact business,” he says. “It always has been. You can only do so much online. We touch fabric. We touch things. We touch people. That’s a big part of this industry, and it feels wonderful to be back.”